Posted by elisenuding ⋅ August 12, 2013
Filed Under  site work, thinking too much

Working on Walking Paths has given me an opportunity to reflect on something that has been niggling at the corners of my brain for a while: the case of site-specific v. site-adaptive work.

My work to date has been site-specific, that is, created for a specific site. For me, that has meant doing research into the history of the site, seeking out and engaging with stories that relate to that specific place, and, overall, investing myself quite deeply in the place. This was  the case for Right. Left, right. Left. Right…left, out of which Walking Paths developed, although Walking Paths itself was conceived as a site-adaptive work – that is, work created with the intention that it be performed at multiple sites. Whilst a site-specific work, or indeed a work for the theatre, can be adapted for another site, I would use the term site-adaptive for work that from its inception was intended to be toured to different locations. Often, these different locations would be similar types of sites – car parks, playgrounds, staircases, etc. But the specific car park, playground, or staircase will not affect the content of the work, although it may affect the logistics – spacing, etc. – in a similar way to the way that different theatre spaces necessitate re-spacing sections, adjusting light cues, and so on, in works created for the theatre.

Not only has my work to date been site-specific, but I have been, and I think, continue to be, more interested in site-specific than site-adaptive work – it just happens to be the outcome of the type of research that I am interested in doing. I embarked on the creation of Walking Paths knowing this, and as such was interested to see how things unfolded. I felt that, really, the main appeal of site-adaptive work was its touring potential. Site-specific work is not tour-able, because it can only be performed at that one site. It could of course be performed multiple times, and revisited and expanded upon, but there is not the same potential for showing the work to different audiences, and (on a slightly cynical, but practical, note) therefore capitalise on more exposure and/or ticket income; site-specific work costs more as the ratio of overhead costs/time/work to performance potential is higher.

This was the slightly cynical thought at the back of my head as I began my first site-adaptive endeavour. And I won’t pretend that these thoughts don’t still exist. However, I did find some interesting aspects to the process of site-adaptive work: namely the extent to which the work becomes something different in each different space as a result of the adaption. This is something I have encountered in site-specific work, too; there are variables of weather, visibility and, especially when working in a public space, the public’s behaviour, all of which affect the performance in different ways. This effect is magnified in site-adaptive work as the space you are performing in is also different, which brings a whole set of new variables.

When we performed Walking Paths at Romsey Art Festival last week, we performed it on two different sections of pavement. They were very dissimilar from each other, and from the space we had been rehearsing at in London. The first was on a side road, with cars parked along the curb (this affected the ability to view from the opposite side of the street), very few pedestrians, and a flower bed planting that took up part of the pavement at one end of the space. The second space was on a main street, with no cars parked along the curb, numerous pedestrians (this affected the performers’ interactions and use of space), and busy shop fronts (which added visual distraction and also meant that people were often crossing the pavement at right angles, rather than just walking straight along it). The upshot of presenting the work in such different space was that it really became a different work in each location, or so I feel at the moment. This is definitely an aspect of site-adaptive work that I think has  interesting research potential. There are several more performance dates for Walking Paths lined up, so perhaps those experiences will further ignite my interest in exploring site-adaptive work, or perhaps not. We shall see, but at this early stage, I’m not going to rule out making site-adaptive work again, even though I still feel a little more excited about the potential of site-specific work. 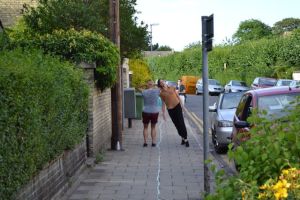